The koi fish, both its Japanese and “domestic” varieties, is one of the most popular and beloved kinds of fish in the world. People have these beautiful fish in their backyard ponds as well as tattooed on their bodies. But have you ever wondered what these amazing fish represent in traditional Asian culture?

In traditional Asian culture, the koi fish represents strength, perseverance and bravery. According to legend, koi fish swam up the Yellow River in China and those who made it upstream and past the Dragon’s Gate waterfall were rewarded for their tenacity by being transformed into dragons. Today, koi fish are used to encourage wealth, good luck and courage.

But not all koi symbolize the same thing. Koi fish represent different things depending on their color, variety and even the direction they’re facing. Let’s go over what a koi fish is, where they come from and what different kinds of koi mean in traditional Asian culture. 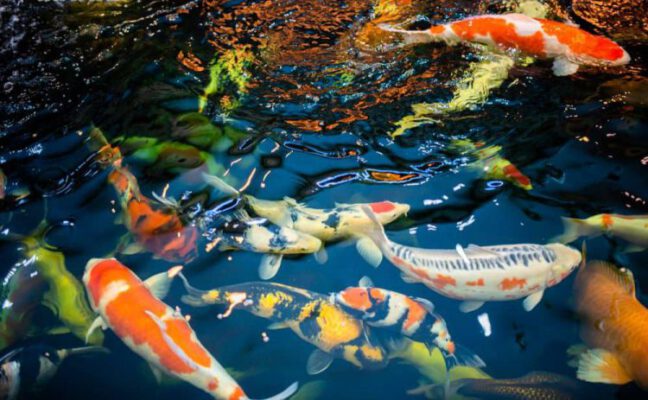 Koi are a member of the carp family of fish and are found natively in Central Europe and Asia. Carp were originally used as a wild source of food and were even aqua-cultured in China as far back as the 5th century BC.

Almost 1500 years ago, wild carp began to be selectively bred in captivity to encourage color mutations. These first selectively bred carp would eventually become what we call goldfish today. Centuries later, there are reports of colored carp fish in the private ponds of various Japanese emperors and other noble figures.

Breeding of ornamental, colored carp fish, or koi as we know them today, began in Japan in the early 19th century. This selective breeding gave rise to the first red, white, blue and yellow markings that koi are renown for today.

By the early 20th century, multi-colored koi fish became known outside of Japan after they were shown at an annual exhibition in Tokyo which sparked their popularity. From then on, koi ponds and koi breeding became a hobby and business for fish keepers around the world.

After centuries of being used as a food source, the common carp has taken on new symbolic meaning as the colorful koi fish we all know today. Across the world, people have koi fish tattooed on their bodies and swimming in their ponds in an attempt to bring some of their mythical qualities into their lives.

At the end of this river is a waterfall, at which most of the koi turned around and let the current take them back down stream. However, the bravest of these koi continued to fight their way against the current and up the waterfall. After hundreds of years of trying, a few of these koi fish made it to the top at which point they were rewarded by being transformed into a dragon, the strongest and most powerful of all creatures.

Today’s koi fish carry with them all the symbolism of bravery and perseverance that those ancient koi earned swimming up an insurmountable waterfall. The color and direction of a koi fish carries with it even more meaning.

If you see a koi fish depicted in a painting, tattoo or a statue, the direction it’s swimming changes its meaning. To make this symbolism even more complicated, the direction it’s facing has different meanings depending on the context of the person it belongs to.

When a koi fish is depicted as swimming downstream, this can have multiple meanings. Often times this can be used to represent someone who doesn’t yet have the strength or the means to overcome life’s obstacles, perhaps due to misfortune or simply being a child.

However, a koi swimming downstream can also be used to represent someone who has already achieved their goals or overcome obstacles. In this instance, the koi doesn’t need to swim upstream anymore because it has already made it past whatever obstacle was in it’s way, such as the Dragon’s Gate waterfall of legend.

An accomplished person represented by a koi swimming downstream is likely older and with nothing left to prove.

A koi fish swimming upstream is by far the most common we see depicted in art and literature. This koi fish symbolizes unwavering determination against life’s eternal struggles and obstacles, as represented by the unrelenting counterforce of a stream or river.

A koi swimming upstream can also represent someone who has overcome smaller obstacles and now has the tools and knowledge necessary to continue on battling against life’s struggles.

In traditional Japanese and Chinese cultures, different members of the family are represented by different colored koi fish. Black represents the father, red for mother, blue for oldest son and pink for daughter.

In addition to specific members of a family, different colored koi fish represent different kinds of people or stages of a person’s life.

Koi fish might look largely similar but there are actually dozens of different varieties. Some of these varieties are old and some have been bred only within the last century or so.

Members of the Gosanke koi family with a white body and red patches on top. Believed to be one of the oldest varieties of koi fish.

Any koi variety with a single red patch on its head is considered a Tancho Sanke and is named after the Japanese red-crowned crane which also has a red spot on its head.

The showa sanke is a variety of koi with a black body with red and white markings. The showa is part of the Gosanke family alone with the Kohaku koi featured above.

Bekko koi are a red, white or yellow fish with small black spots on its body. In Japanese, the name means “tortoise shell”, and you can see why.

Butterfly koi come from the breeding of wild longfin river carp with traditional koi. The result is a long elegant fish with long fins that’s actually hardier than regular koi. Some don’t consider these fish technically koi at all.

Be who you are and say what you mean, because those who mind don’t matter and those who matter don’t mind.